‘Doing nothing’ involves a whole lot of ‘something’ 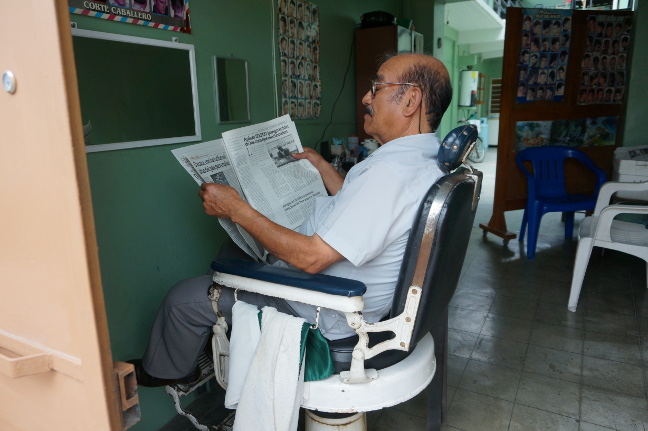 Is reading the paper while waiting for a customer considered “work,” or doing nothing?

Of all the tasks I’ve added to my plate in the last year, none has caused me more psychic disruption than the simple act of doing nothing. I’m not even sure I know what I mean by “doing nothing.” The whole idea is oxymoronic. If I’m doing nothing — if I have turned it into a task — then I am doing something, that is, nothing.

Even when I find myself in a place where I feel as if I have stepped over the line into a state of nothingness, I know it’s not really what it seems. It’s just that I have created a space where I can do that which I seldom allow myself the time or luxury of doing in my normal life.

Context is everything. Exploring this notion (which, ironically, drove me to this keyboard and the act of composition, thereby turning nothing into something) became possible only through the complex process of planning and embarking on a two-month winter break to Oaxaca, Mexico.

In the run-up to this event, my wife, Kathy, would tell people, “No, it’s not a vacation. It’s just a relocation of our life.”

My wife is a bit of a work-a-holic type. It’s so much easier to see this trait in others, but standing back from the mirror, I realized that I have a lot of that in me, as well. It just plays out in different ways.

Kathy likes a good project. Meetings, phone calls, objectives, Gantt charts and deadlines. Like me, she welcomes the “ask,” and has little ability to say “no.” As a result, we find ourselves running from one thing to another, many of them volunteer commitments, doing research, shooting off e-mails, meeting with vendors, exploring funding sources for a new culinary school project, juggling pet-care duties and calls to daughters and siblings, taking overnight trips to meet and talk about travel information at freeway rest stops, and on, and on, and on.

Where did this come from? Nature, or nurture? Our work histories suggest the power of patterning. We both worked for years in journalism, with deadlines and the frenetic cross-currents of sources and editors and readers. Then, to acknowledge my wife’s lifelong passion, we side-shifted – upshifting wasn’t humanly possible, and downshifting it definitely wasn’t – into the restaurant business for 10 years.

Deadlines and vendors and customers, oh, my.

Selling the restaurant might well have opened a time of leisure and quiet contemplation. Nope, not in our natures, nor in our nurture.

At a time when most people are contemplating retirement, we found ourselves so looking forward to time away, in southern Mexico, with a chance to disconnect from all we had heaped on our lives.

“What are you going to do in Mexico?” people would ask.

“Nothing,” I found myself saying.

And then I would contradict myself. I would talk about how I never give myself time to just sit down with a good book and read, diving in and swimming across the lake until I hit the other shore.

Or I would talk about exploring the art and architecture, the cuisine in the land of the seven moles, the source and substance of tequila’s mysterious cousin, mezcal.
I realized that I was not describing a time of nothing. I was describing a lot of something, but not the same things that occupied our domestic (that is, U.S.) lives.

In college, my good friend Dan and my brother Pete and I developed a shorthand to describe our pot smoking. We thought ourselves so clever, hanging out with my parents, chortling incessantly, probably reeking like ripe bongwater and speaking in code about “doing something different.”

Inhaling the fumes from a bag of bad weed would have been different for my parents, but not for us. For us, it was the usual, normal, what we did at 19 and 20.

When I read about Americans’ reluctance to use their full allotment of vacation time — Project Time Off reports that 41 percent would not use their full vacation allotment in 2014 — I wonder how many of them could qualify for membership in the “cult of busy.”

Many of them tell researchers that they fear losing their jobs, or appearing non-essential in their absence. Others talk about the pile of work that demands their constant engagement or a belief that the pile will only grow if they take a break.
And two-thirds say they hear “nothing, negative or mixed messages” from their bosses when it comes to taking a vacation.

I’ve got my doubts. I worked busy, stressful, demanding jobs my entire life, but I always relished and took my vacation time. It made me a better person, even if it allowed me only the luxury of falling asleep on a beach.

I suspect too many Americans drink from the same fountain, the one that pumps out a constant stream of applause for those who are “most busy.”

Ask any American casually how it’s going, and note how many times they answer, “Oh, really busy.”

Then watch them. Often times, the people who effect this image of overload appear, even at work, as if they are sedated. Moving in slow motion, they struggle to move through a world of puddling molasses. It takes them forever to do anything, and not that well.

My wife and I constantly find ourselves noting how so-and-so takes forever to do what either of us can — and do — accomplish in minutes or hours.

We think they are deficient, or crippled by some genetic lassitude.

We seldom stop to think that perhaps we are the broken ones, afflicted by the rigid grid of deadlines that overlay our lives’ work hours.

Take a break like ours to Mexico, and we tend, then, to approach unscheduled time with a near pathological rigor.

“What are we doing today?”

It seems a betrayal of the unwritten rule of travel productivity to even contemplate answering, “Nothing.”

Yes, on one hand, we want to relax and downshift, so why are we charging out the door again with packs and maps and guidebooks to tick off another list of “must-see” monuments, “must-eat” diners, “must-get” trinket markets?

I say I hate the congested 12-countries-in-a-week, hop-off-the-bus approach to travel. Then I find myself creating my own sanctimonious variant.

This morning, three weeks into our stay, I found myself relaxing into yet another online news journal, going to a literary magazine’s web site and reading a great story by Maile Meloy, putting it all away for some time with a Carl Hiaasen novel, wandering outside to shop from the back of the battered VW van driven by the gentle veggie vendor, improvising a workout device from buckets and a broom handle, and returning to my reads.

And, all the while, fighting to ignore the voice in the back of my head that wants me to believe it’s all a huge waste of time that could be better spent …

Doing what? Perhaps, as in the Seinfeld sitcom, joining friends at a coffee shop for a good session of active nothingness. The show, famously celebrated as “about nothing,” was really a show about small things, in short, the acts and irritants of daily life.

Getting lost in a parking garage.

Inventing a product that, on one level, makes so much sense, but on another makes no sense at all (the “Bro,” aka Mansierre, a bra for men with gynecomastia).

Take the minutiae of daily life, ponder and debate and recast them into scale much greater than their true import, and you, too, might create something from nothing.

Frankly, the process of pondering the essence of nothingness is driving me a bit nuts. Even so, it has taken several hours, much thought, and a lot of typing to reach this point, so nothing could be finer.