I’m not much of a social media person. I like direct contact, which is why I will fire off an e-mail note to someone whose work or other actions has been particularly impressive. I believe in saying “thanks.”

When I recently read a letter to the editor in The New Yorker, I enjoyed the sentiments and felt a parallel with my own experience. So I looked up the writer, and found a web page (so old-school, right?), and (egads!) contact information.

I wrote a note.

And he wrote back.

And so it went.

I’ve pasted our exchange sequentially below. It left me feeling a sense of elation, that people like Ken Bates and his wife are out there in the world, working hard, doing what it takes to make a life — far beyond the inanity of our political yammering classes and their lumpish militants. 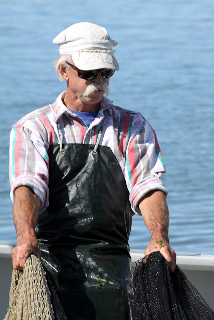 Barack Obama’s memoir of how the Affordable Care Act was passed illuminated the origins of a policy that has affected me profoundly (“The Health of a Nation,” November 2nd). I am a career commercial fisherman. In the nineteen-seventies, when I started working, fishermen and merchant mariners like me had federally supported health coverage through a scheme that had existed for decades. That scheme was terminated, in 1981, by Ronald Reagan. For a time, I bought private insurance, but eventually it became too expensive for my seasonally fluctuating income.

When A.C.A. insurance became available, I quickly signed up. A year later, I had a heart attack, and needed a cardiac stent. The plan I obtained through the health-insurance exchange covered my extensive medical bills and, as a result, my wife and I were able to keep our home, our truck, and our fishing boat.

I am now seventy. This summer, I spent a hundred and ten days on the ocean. No one gets where they are without the help of others. It was a pleasure to read this piece, which illustrated in such detail how I was helped by folks I will never get to meet.

(My note to Ken, and our back-and-forth)

It was so great to see your letter in the current issue of the New Yorker. It mirrored my experience. I had insurance from my business in newspapers for many years, but after I went freelance in 1997, I had to pay my own. Rates kept going up, even though I never claimed a dime. Luckily, I stayed healthy (I work out, run, windsurf).

I watched progress of ACA. Why they waited until 2014, beyond me. But when it arrived, I benefited from supplements and coverage. One benefit was coverage for a colonoscopy after age 50. I got one, it found a large mass in my colon, which surgery removed. It was benign, but could have become cancer.

I’m now 70. I figure I’ve had a glorious additional six years because of the ACA, and even though my surgery under the pre-Medicare insurance cost my wife and me about $11,000 out of pocket, the insurance covered the other $41,000 of the bill. In each of those facts, so much to unpack.

We have been getting screwed by the insurance companies for years. Read “The Bitter Pill” in Time magazine to learn how they have worked the con. The ACA was not perfect (it kept insurance companies in the game), but it got us a step closer to Medicare for All. I’ve got it. Why doesn’t everybody?

Best of health and success to you,

Thank you so much for your comments concerning my letter to the editor in the New Yorker and taking the time to track me down. Your story concerning your experience with the ACA is exactly the reason that health care for the American public is so important. I have had the “opportunity” to experience health care costs both ways.

Before the ACA, my wife and I were uninsured, but we have led a very fiscally conservative lifestyle. Through the years we have tried to save as much money as we could. 9 years ago, after spending the summer trolling for salmon on the ocean, the two of us came home, switched fishing gears and proceeded to fish anchovies for 22 days straight, nose to the grindstone and no breaks.

3 days later, I got my hand smashed between two filthy fish bins in the back of a guy’s truck. That led to a MERSA infection, 8 days isolated in the hospital and surgery. Even with a 30% discount with a cash payment, the hospital bill erased most of the income from our summer and fall work.

Again, I really do appreciate the time you have taken to contact me. I am curious about your newspaper and writing work and where you wind surf. I have board surfed since fifth grade. Linda and I usually take a month in February to surf and hike in the desert in Baja California. The two of us live on a small island in Humboldt Bay. It has been frosty the last couple of nights and we expect it will be a cold one tonight. It is probably chilly where you are too.

So good to get your note, and so sad to read of your encounter with the medical-insurance complex. What a tragedy, that someone who can work so hard to make a buck finds it stolen because of an accident for which he needs care. I say stolen, because I believe that is what it is. The people who fixed your hand did a good job, and probably got a decent check for it. But the real theft was the skim that the hospital took, and all the other expenses they loaded into that bill.

The chief exec at a small hospital in The Dalles makes over $700,000 a year. Does he deserve it? Ha! Guess I know the answer.

Yours sounds like a lovely life, nonetheless. I would love to meet you and Linda some day. I almost went to school at Humboldt, shifted to Southern Oregon, finished my journalism studies at Oregon. Ended up back in Ashland for 14 years, working at the Medford paper, hiking all over southern Oregon and northern California. Love it down there.

When I was a kid, I wave-surfed in SoCal, but too many people for me back in the late ’60s, so I ran away to Oregon and never looked back.

My wife and I are taking a winter break to spend some time in Summerland, south of Santa Barbara. No plans for our return route. If we detour along the coast, I’ll give a call. Maybe we can grab a beer (if the Covid situation permits).

Best to you both,

If Linda and I had to pick a place to hang out in Southern California, it would be Summerland. I grew up surfing on that stretch of coast, and I fished lobsters out of Santa Barbara for about ten seasons. We have a ton of friends there including five or six commercial fishermen that are in our code ( radio) group when we fish salmon every summer.

If you find yourselves driving through Eureka, let us know. We have a guest cabin here on the island, and would be happy to put you up for a night. Otherwise we would love to bring you over to the island for a visit; the only way to get here is by boat.