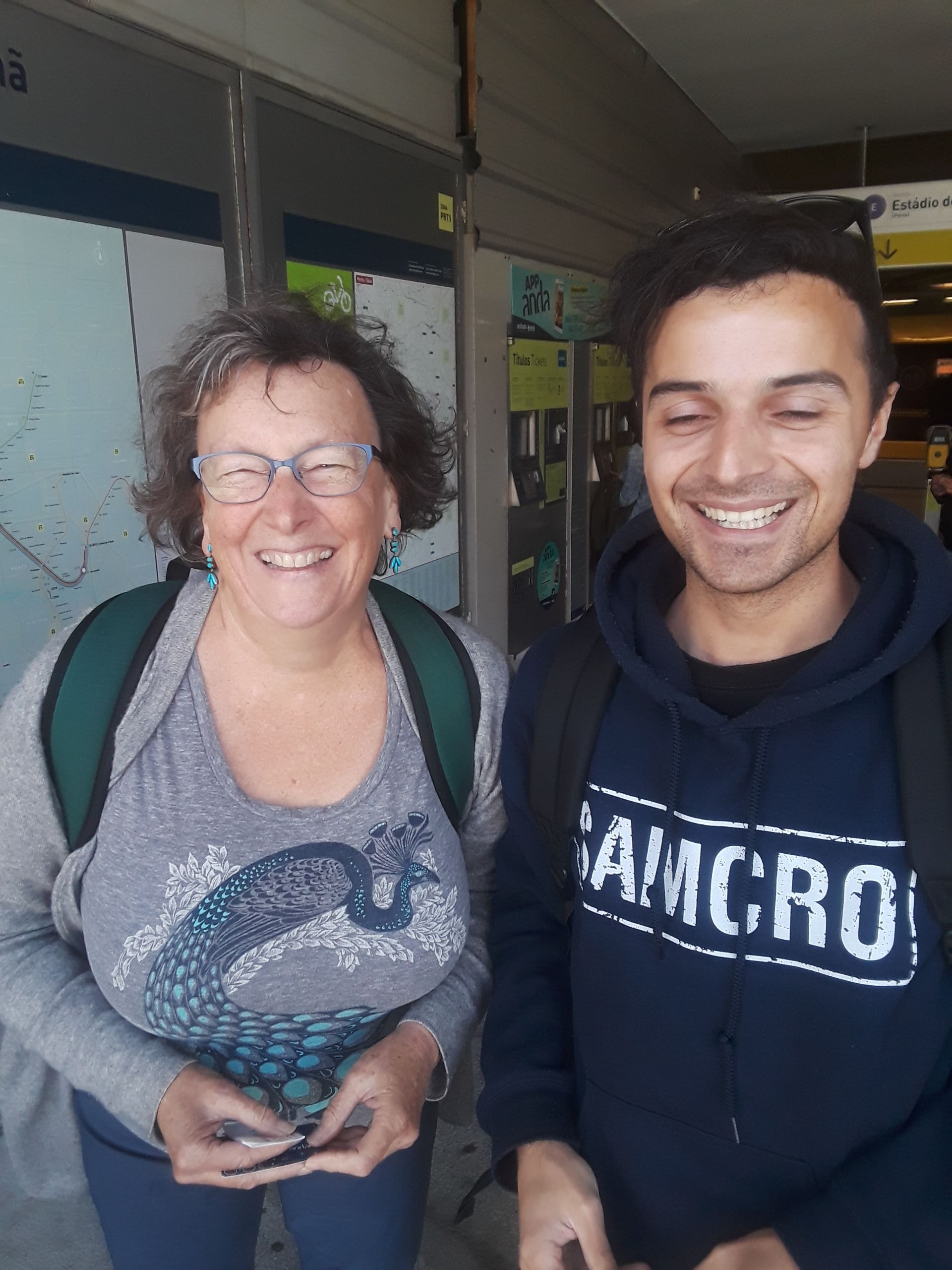 My wife, Kathy, and Digo, after he helped us with Metro ticketing.

Midway into our third week in Portugal, I have to say (not because someone has a gun to my head, but because it’s true), the people of Portugal are marvelous. Almost to a one, they are warm, welcoming, helpful and tolerant of the English-speakers in their midst. And we are a bunch, if you factor in north Americans and Brits and Aussies and others of the former British empire.

First, let me extend profuse thanks to Digo (“Like Diego, but no ‘E’,” he said), who came to our rescue five minutes after we stepped from the train in Porto. Our next task was to figure out the Porto Metro system, which operates on a completely different model than the one with which we had become familiar in Lisbon. Ever the soul of wit, I told my wife, “Looks like Greek to me.”

We’re standing in front of the ticketing machine, reading all the fine print about buying tickets based on zones of travel. The farther you want to go from where you stand, the more you need to load onto your travel card. It’s a lot to ask of people who have just arrived and don’t know bupkiss.

Digo to the rescue. He’s buying his own tickets at an adjacent kiosk, sees our plight, asks if we need help.

He leans in, asks the triage questions, helps us dial up the screen and select from several options, all in Portuguese. The most confusing one to us is the one about some tax and whether we want a refund and, if so, what our tax number is.

Digo helps us breeze past this irrelevancy, to the payment screen, and determine that, with this kiosk, we can pay by coin or card, but no paper currency. Have card, will travel (if you don’t get the Paladin reference, check out “Have Gun — Will Travel” on Wiki).

With our angel on hand, we soon held passes to the Metro, and Digo was off to another line and his own destination.

Such a sweet young man, who apologized for his limited English, which embarrassed us for our lack of more than 10 words of Portuguese. He said he had traveled himself, and benefited from the kindness of strangers, which was the real lesson here.

At one time or another, we all are strangers, and all are locals. I recall how excited I was to welcome foreigners to table at the restaurant my wife and I once ran in our small Oregon town. I understood, from past fumbling experience and frustration at having no language skills like the ones I had at home, what it must be like for them to sit at table and try to order from a menu printed in English.

Here, ground zero for European travelers seeking a good deal and a better time, almost every menu is printed in Portuguese, English, French and German. The Portuguese are prepared for visitors who speak a different tongue, knowing how much they can enhance that experience by meeting them where they speak.

As we learned, students in Portuguese schools study their native language, but also are required to take another.

As a high schooler in the U.S. in the 1960s, a foreign language was an option, not a requirement. Different worlds, different times. In a global economy, we all need to be a little multilingual.

Still, not all embrace this notion. At least not in the view of the Frenchman seated near us in the TimeOut dining hall in Lisbon. He travels often to the U.S on business and speaks fluent English. His wife speaks none. So it may not be true that almost everyone speaks a little English, it is probably true that almost everywhere, someone does. Our new French friend thought we were English, because that is how we first broached conversation. He observed that the English never bother to learn other languages.

We clarified our country of origin, but couldn’t dispute his conclusions as regards our own countrymen, even those who bother to leave Indiana for a European visit. I doubt that many Americans feel a need to study the language of the country they plan to visit. It comes from a chauvinist belief that everyone speaks English — or should.

Even though I may lack more than a smidgin of any other tongue, it bothers me to open by asking, “Do you speak English?” At the train ticket counter in Aveiro, I opened with a simple, stock Portuguese query, upon which the ticket seller said, “Don’t bother. I speak English.”

We felt for each other. He saw more benefit to himself than enduring my bastardized, minimalist attempts at engaging. And I felt relief that I didn’t have to struggle through that.

For myself, I have long tried to approch host countries with a handful of basic phrases that can get me through situations that most visitors encounter.

My education prepared me, in weird ways, for travel in and around the Mediterranean. I grew up Catholic. We read Latin at Mass. I later studied Latin for a year, which helped me study English and, later, tackle Spanish after three years of German.

On my first trip to France, I felt totally handicapped by my lack of talent at that language. A few of my hosts were forgiving, but not all. It was a stark contrast with the situation in Portugal, where most guest service workers speak a little English. I’ve tried to add my basic kit here, but seldom feel a crying need for it.

No matter how much or little language you know, the most important phrase to add — out of simple courtesy and respect to your hosts — is “thank you.”)

I was chatting with a shopkeeper in Aveiro, Portugal’s charming Venice knockoff, about local wines. She quickly discerned that I was not from Portugal, and in comfortable English, helped me select a bottle. We commiserated about our respective knuckleheaded presidents (she was from Brazil), and I apologized for not knowing much Portuguese.

“Have you learned a little?” she asked.

She met her boyfriend, a Briton, while studing English in Manchester, England. I asked if he spoke Portuguese.

But he’s still her boyfriend. For now.