Start walking, keep walking and don’t stop walking until you are full 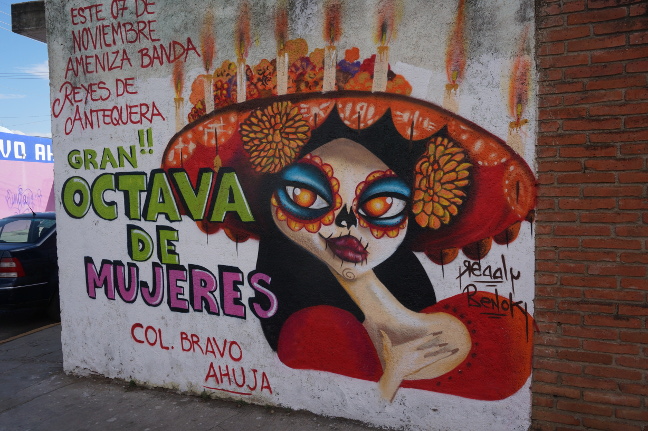 One of Oaxaca’s many murals.

How can anyone experience anything of a place at the speed of auto-motion? Cars and buses are great for moving us from Point A to Point F and quickly past Points B, C, D and E. What do we know of the in-betweens after we arrive at F? “Who cares; we were going to F.”

Sometimes, if we have a broken wrist and F is he hospital, we don’t give a rat’s ass about B, C, D and E. Just get me to the doc.

That said, driving is no way to see anything much beyond the bumper of the car in front. In the place where I live (Oregon’s Columbia Gorge), I am generally so focused on the road, signage and other drivers that I seldom take in much of the scenery on either side.

On rare occasion — I’ve tried to do this more often — I will divert my gaze, left or right, and see something I have never seen before — in 15 years of regular passage. Sad.

That’s why, in explorer mode, I believe that we need to reject speed in favor of the pedestrian. Often used as a diminutive adjective, “pedestrian” needs rescue. Like “slow food,” “pedestrian travel” implies opportunity to meet the world at an engaging pace, eye to eye, by and by.

As my wife and I planned our two-month stay in Oaxaca, the largest city in the Mexican state of the same name, we committed to learning the city by walking. OK, I’ll admit that we read a guide book. But we promptly forgot almost everything we read of any particularity that would serve to get us from A to B. 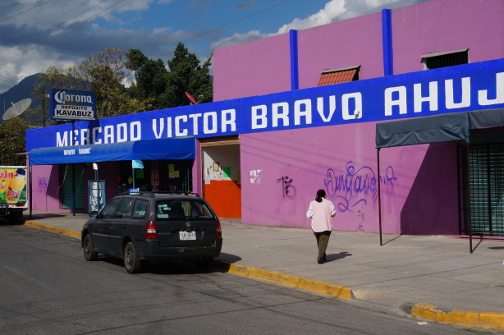 A “hidden” (off the tourist map) mercado.

As we approached our place, we started at the center, or by walking to the center first, then looping our way back out, as if describing the geometry of a clover leaf.

Occasionally, map in hand, we would pick a destination and move in its direction. Along the way, discovery, as well as at the destination, and along a different path home.

The other day, seven weeks into our stay, we rose to a blank slate. “Let’s just go to a place we haven’t been before,” my wife said.

“There’s nothing you want to see in particular?” I asked.

I picked a neighborhood through which we hadn’t yet walked. 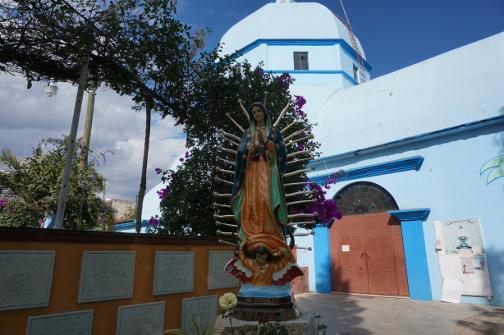 As we left known territory and entered a part of the city beyond the edge of our free turista map, we worked around a crush of cars assembled to gather children leaving school, across a street from a huge panteon (essentially, a graveyard).

That’s when we heard the thwacking sound. No, not zombies escaping. A bit farther on, we came to the source — an older man and a youngish woman, behind chain link, alternately whaling the tar out of a rubber ball with what looked like tennis rackets, on a court that reminded me of a racketball court with only three sides.

When they finished, I verbally applauded their energy and grace. I asked the man what the game was called. “Fon-ton,” he said. 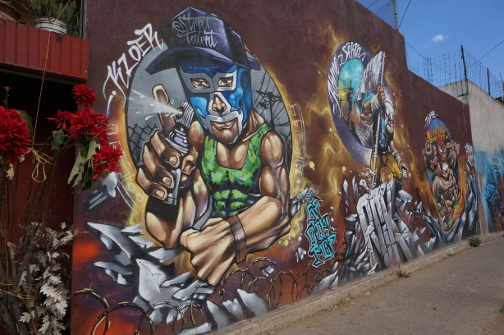 I Googled it later, and found a Wikipedia description of a sport called “Frontenis,” invented in Mexico in 1900, and played now in 18 countries. The description matched what we witnessed. It looked way cool, like a ton of fun, and I didn’t know it existed before we stumbled on it.

Into the adjoining neighborhood, we came across a public market we hadn’t yet explored. Similar to several others, it was bright, neat, clean and compact. Great for locals.

We next found a church, not that unusual in Oaxaca, but a bit dowdy, and new to us.

Across the street, an explosion of color, at a store selling cartoon character figurines (Snow White, anyone?) and pinatas. 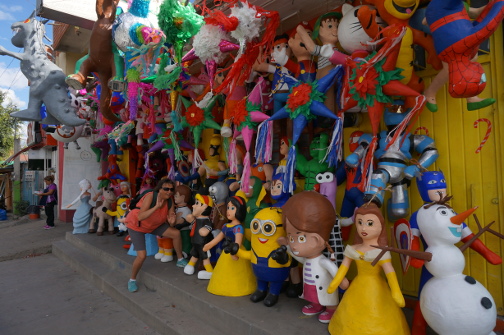 A store full of fanciful figurines and pinatas — a visual treat.

Down the road, another Chinese buffet (the town has tons of these places, but nowhere that we have discovered where you can sit down and scan a menu of a thousand items and select something other than modest variants on veggie stir-fry).

Working our way south, we came across what looked like a walkway but also might have been a road, which paralleled a drainage canal draining … well, let’s just call it dirty water. 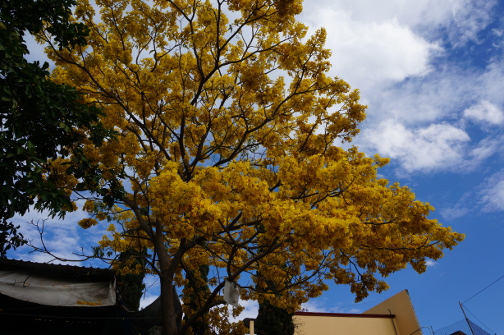 The walls of the homes facing the canal, like many elsewhere in town, had been appropriated by artists of varying talent, for bright and engaging murals, at one end of the scale more graphic than good, and at the other, more indicative of talent deserving an audience greater than the few who strayed down this back alley.

As a car surprised us and proved the flexible use of the corridor, we came to a tree blooming with bright yellow flowers. It was one of many scattered around town. I have no idea the variety, but they are spectacular when you find them, a glorious cloud rising just above the concrete jumble and litter that mars a city of marvelous art, architecture, energy and warm spirit.

The footpath-street-canal led to a boulevard down the middle of which a bike path had replaced a trolley line (Avenida Ferrocarril). We took that route as a welcome alternative to sidewalks. In Oaxaca, sidewalks are an unruly affair, sometimes wide, sometimes missing, often tipped topsy by roots and free-form design additions, or interrupted by utility installations or driveway ramps. 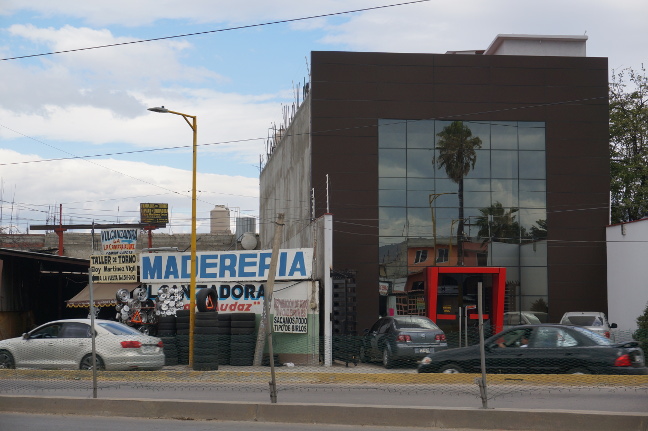 So the old rail bed, which was little used, put us beneath a canopy of trees and in between the traffic heading east and west.

After crossing a major boulevard, I realized that we had returned from the “great beyond (the part of the city on the tourist maps)” and back to the “centro.” A man stepped out from his repair shop when he saw us consulting our map, to ask if we needed help. We thanked him, but declined the offer.

Even though we again knew our location, what lay ahead was still new, scrolling up more churches, crazy architecture, free-form integration of parks and parking, and more. 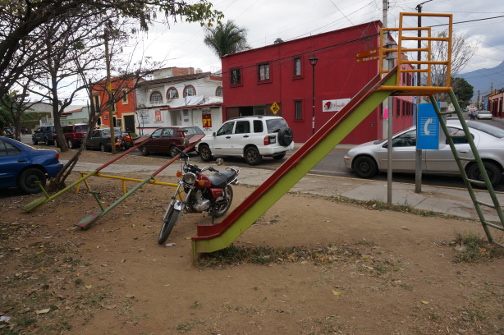 We kept walking, seeing, stopping, talking, absorbing the magical ordinariness of it all.

Very, very slowly, never once tempted to leave the sidewalk and join the people inside the cars, out in the congested streets, jostling to protect their fenders while missing abundance uncelebrated, wonders unimagined, revelations uninvited.