Dueling for passengers, an urban bus and a collectivo in Oaxaca, Mexico.

With three weeks remaining on our two-month stay in Oaxaca, I took a collectivo out to the airport yesterday.

The driver asked me where I was going after I reached the airport, on the assumption that I must be flying.

Nope, I told him, just picking up a rental car.

As I spoke with him, it struck me that I was probably speaking heresy. In essence, I was telling him that I was graduating to a more preferable mode of transit than the mode that provided his livelihood.

To his credit, he didn’t take offense, jam on the brakes and dump me by the side of the road.

On the way back into town, in the air-conditioned comfort of the VW Jetta, I found myself a bit wistful. I had gained flexibility and independence, at the cost of all that comes with going slow, on foot and stop by stop on public transit.

Collectivos are a marvelous option. I wondered why something similar hadn’t migrated north to the United States.

I can speculate. Maybe we’re too rich. Or too independent (gotta have our own rides). Maybe we’re too dispersed; it’s a model that wouldn’t work in the wide open spaces of the American west (neither do Uber and Lyft). Or maybe it’s just too capital intensive for anyone to launch it against the tide of U.S. auto-fixation.

As Uber and Lyft gain traction in urban areas, they offer a stark contrast. The business model is far less costly than the collectivo model. Just enlist a bunch of people who already own cars, to provide rides for people who don’t.

In our first six weeks in Oaxaca, when we found it inconvenient to walk, we turned to buses or collectivos. Both really get the job done. For my money, the collectivos are the better option, especially for trips outside the central part of town.

Oaxaca has taxis, too, but they’re a bit spendier, and offer less adventure for that higher price.

Why would any traveler looking for a novel experience pass on using a collectivos? Fear, maybe, or a pathological embrace of the familiar. Silly people.

Now that I’ve sung the collectivos’ praises, it’s time I explained how they work. First of all, they look like taxis. They even have the light on top with black type that says taxi. There are similarities to taxis, to be sure, and a rider can book a collectivo to work like a taxi, at a higher fare. If you want to do that, just take a taxi.

In their difference from taxis lies the genius of the collectivo. 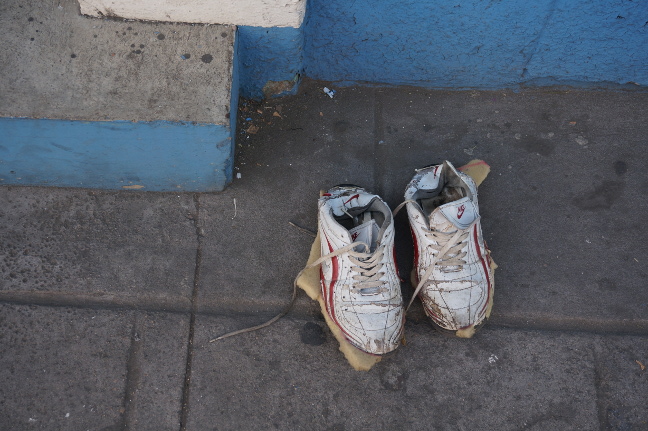 The best transportation in Oaxaca.

Unlike the Uber model, they are not owner-operated. A company owns and operates the collectivos, hires and pays the drivers. The vehicles are typically small, Asian sedans — think Nissan. They are painted red and white. And they run specific routes, like buses, as indicated by the signs on their windshields indicating where they go.

Their fare structure is still a bit of a mystery. We grabbed one to deliver my wife and me to a town — San Bartolo de Cuyotepec — about 10 kilometers outside Oaxaca. The driver charged us 80 pesos (roughly $4.80). For the return trip, we flagged down a ride with a bunch of other riders, and paid 20 pesos ($1.20). My ride to the airport, maybe five miles outside town, cost 10 pesos (60 cents).

Just remember this: If you want to cut costs, you should welcome the chance to share a collectivo.

Here’s how that works. The cars can hold six or seven people. It’s to the company’s benefit to cram as many in as possible — three in the front, and three or four (depending on how big) in the back.

The first rider to sit in front with the driver should prepare to scoot over onto the console and brake handle when another rider hops in front.

If you want a ride, you stand alongside the road and hold up fingers for number of passengers. A driver with space will honk as he approaches loading zones, and hold a hand out with fingers showing how many he can take on (one hand, five spaces max).

As you wait for a ride, you may be able to read the destination signs on the windshields of approaching vehicles. If not, just confirm the destination with any driver that stops.

Then jump in, and enjoy the ride. It’s good form to have small change on hand, rather than handing the driver a 500-peso note when you disembark.

To accomplish this, drivers will sometimes drive like maniacs.

You may enjoy the thrill as they push the speed limit and stretch the width of the road to include non-existent passing lanes.

You may also see your life pass in front of your eyes.

One longtime local advised against using collectivos, out of regard for personal survival.

You can catch a collectivo ride along any major boulevard leaving or returning to town. The collectivos have a number of pickup zones, such as on Calle Bustamante south of the Zocalo.

The whole collectivo scene can be a bit dizzying, like watching a swarm of bees on the comb. Don’t let it scare you. Just jump in, ask simple destination questions (“San Bartolo? Si? Cuanto (How much)?”)

Taking a bus is the other, safer and somewhat less flexible option.

That, however, implies waiting for a bus that is stuck to a schedule. There are numerous bus options. A second-class bus station sits north of the Abastos (Central) public market. There is also another bus station on the south end of downtown, that serves more southerly cities such as Ocotlan and Miahuatlan.

If you want to go, and go now, a collectivo is your best bet.

That said, the in-city buses are cool, too. Many are very tired, spewing diesel exhaust, screeching brake pads at every stop. But they keep on trucking, and it’s a good way to go native.

Cost (winter 2016) is just 7 pesos (42 cents) for a ride to wherever they go. They also sport signs in the windshield to help you pick the right bus.

The problem with all that? You need to know the shorthand for the various neighborhoods (colonias) or major landmark destinations, like hospitals, and boulevards. Otherwise, the signs mean nothing.

Get a map — tourist office on Benito Juarez just west of Llano Park — and familiarize yourself with the neighborhood names. Thus educated, you can generally ensure arrival somewhere near where you actually want to go.

A willingness to walk is critical. Taxis will take you door to door. Buses and collectivos require a bit of hoofing.

If the bus turns away from your desired path — their routes can be a mystery, too — just stand up and get off at the first opportunity.

The bus is also a great way to give yourself a self-guided tour to … somewhere. I like serendipity when traveling. I veer away from landmark tourist magnets, and guided tours. I prefer to amble, and veer impulsively off course down side streets, alleys, up stairways and down cobblestone paths that serve residential areas.

Which is why, for a lark, I like to just hop on a bus and see where it goes. We did that the other day, with the goal of just going in circles. Well, it didn’t quite work out that way.

The bus took us to a big public market, then stopped. The driver told us if we wanted to continue we had to get off and get on a bus that somehow had materialized right behind the first bus.

In the U.S., we would get a transfer ticket. Not here. We figured, what the hell, then got off, got on the other bus (the driver didn’t ask for money, which is their way of providing a transfer), and began a ride that took us way out of town and up a rambling dirt road to the back of beyond.

It stopped next to a bunch of other battered buses near a little lunch stand. We had to get off and wait until one of the other buses started up, and pay for a return trip to town.

It was a hard wait. As we slowed down, I could see a couple of dogs competing for a chance to mount another. A pathetic-looking dog met me as I stepped from the bus, its protruding ribs telling more than I wanted to hear.

The lot was full of mangy mutts, thin, sick, starving. Traveling in a poor country — where many of the people live little better than their dogs — is still painful for dog
lovers used to providing their own pets everything but a college education.

Kathy dispensed the leftovers from her lunch to the pack, and left crying.

We had no idea where we would go or what we would see when we got on the bus. It delivered us to something sad, far from a picture postcard and barking with more questions than answers.